Home Events Review of Ultra Singapore 2018: 5 Things About the Electronic Music Festival We Need to Talk About
Events

Review of Ultra Singapore 2018: 5 Things About the Electronic Music Festival We Need to Talk About 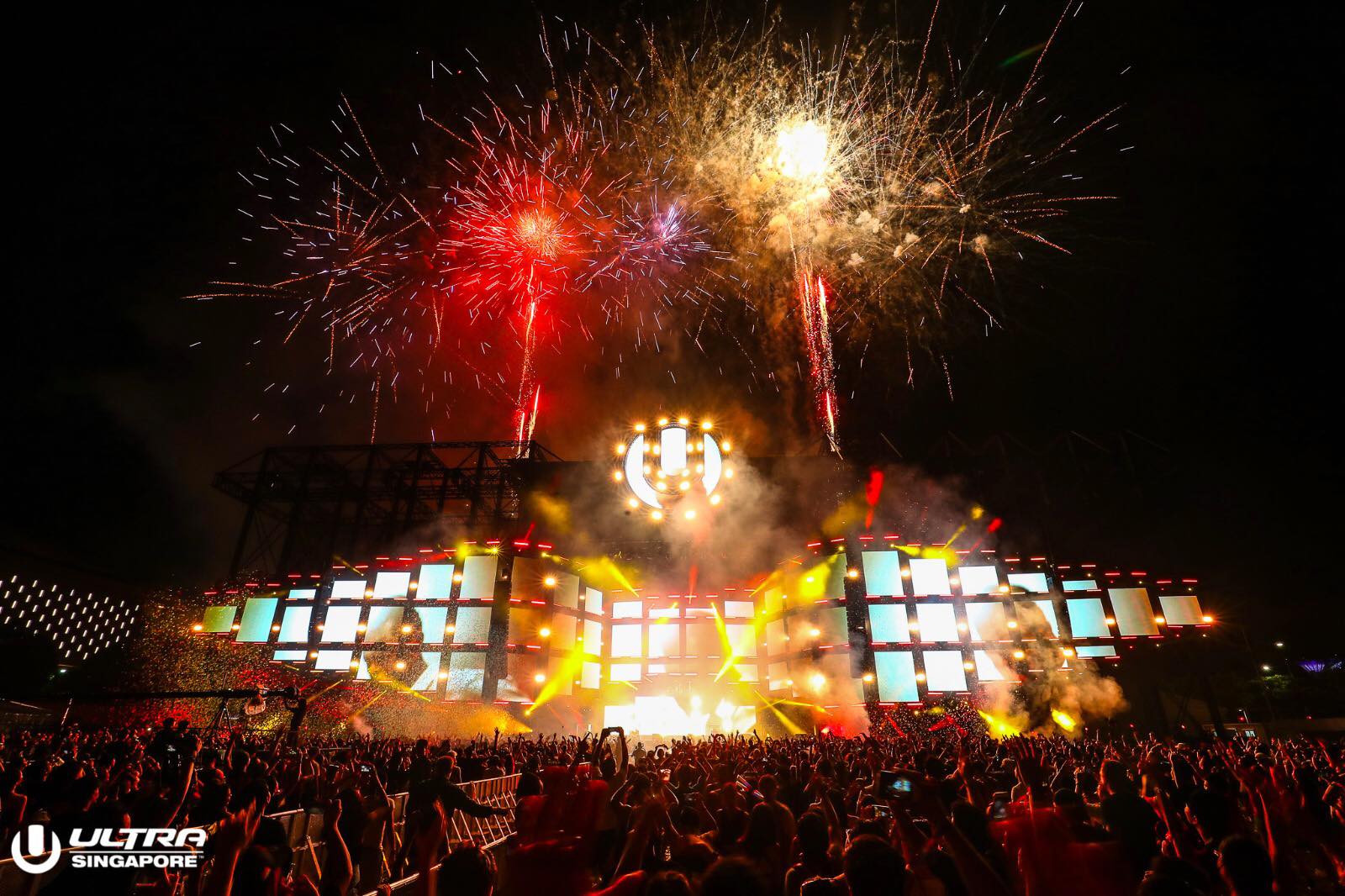 Where music festivals in Singapore are concerned, Ultra Singapore 2018 was one for the history books. We review how it was, what happened, who played, and which acts reigned supreme.

There’s only one place where you’ll find this motley crew of spectacles and shenanigans, and that’s a music festival. And when it comes to these jamborees of juggernaut proportions, one event (and one powerful word) springs to mind – Ultra.

The third full-fledged rendition of the global festival series – since it debuted as a one-night showcase in 2015 – drew thousands of starry-eyed ravers over the long Hari Raya Puasa weekend; a testament to its ever-burgeoning appeal. Once again, the two-day festival transformed the surroundings of Marina Bay Sands into a kaleidoscopic playground of electronic dance music, with a bevy of both commercial and underground DJs to cater to all punters. Whether you were a glitter-coated EDM darling or discerning chin-stroker who watches from the shadows, chances are, there was a thing or two about this giga-sized event that scored brownie points in your books.

As for us, here are our five major takeaways from this phenomenal fiesta. You ready for the drop?

A safe, but sound selection of main stagers

Being one of the mightiest players in the international festival circuit, Ultra has the capability and pulling power to diversify in its lineup. However, the Ultra Mainstage saw numerous returns that some might say was a tad safe and insipid. Both Nicky Romeroand Steve Angello made a comeback after their 2017 appearance (this was also Romero’s third time in Singapore under the Ultra brand), as did DJ Snake and Afrojack who both took the stage in 2016. It was good news for anyone who’s a fan of these hard-hitters, but a downer for those who yearned for variety.

With that being said, relying on these past success stories ensured one thing – star-powered consistency. When you’re in the mosh pit being blasted with euphoric prog-house hits and gritty trap bangers, and you witness their extraordinary effect on the sea of people around you, it’s hard to deny that these acts still hold a special place in the hearts of many.

Angello played a sweeping, cinematic set that continued to solidify the Swedish House Mafia alumnus’ reputation as one of Sweden’s top exports. NERVO dropped a brilliant sundown set that fused everything from bass house to electro-house, even including live vocals for their Nicky Romero collaboration, “Like Home”. And DJ Snake floored the masses with his artillery of anthems like “Let Me Love You”, “Magenta Riddim”, and “Middle” which coincided beautifully with a barrage of fireworks that closed the night. For what Ultra Singapore lacked in main stage diversity, it definitely made up for it with flawless moments.

A new haven to call home for left-field seekers

With the evolving spectrum of dance music and the new sub-genres that spawn from it, you can’t fit everything onto one stage. So while the Ultra Mainstage had its lion’s share of commercial EDM, the newly-unveiled Ultra Worldwide stage (replacing the Live Stage from previous years) provided an alternative platform for those seeking sounds like future bass, dubstep, trap and bass house. It was, indeed, an intimate solace for those fatigued from the Ultra Mainstage action.

It was here where Ultra Singapore could shine the spotlight on more experimental showcases, such as the emotional, vocal-cradling future bass of Illenium, and the soaring yet punchy ‘heaven trap’ of NGHTMRE and SLANDER. Local wonder, MYRNE, also made his growing presence felt at this stage, receiving huge ovation for his bass-heavy selections. RL Grime also made a mega impact with his rumbling trap numbers, making everyone lose their marbles, in particular, with his gobsmacking mash-up of his song “Waiting” and Galantis’ “Runaway (U & I).

A comeback for trance?

Many seem to forget that, long before EDM reached its zenith in the 2010s, trance was King and Queen of festivals all over the world. And while Ultra Singapore was still dominated by the former, it gave an opportunity for the latter to spread its wings once more. Guess what, folks? Trance hasn’t lost a beat.

Even at an early timeslot of 4.10pm, Aly & Fila enraptured the Mainstage masses with the nostalgic staples of trance – rolling, chunky beats, melodious synths and cherubic vocals that filled the floor with peace and love. Frankly, the transition from this to the aggressive Dutch house of Sunnery James & Ryan Marciano that followed was too drastic; Aly & Fila deserved a much later timeslot that fit the music.

Which is why we were quite chuffed that Andrew Rayel had a peak-time set at the Ultra Worldwide stage, dropping trance classics like Darude’s “Sandstorm” and Faithless’ “Insomnia”. And of course, trance legends, Above & Beyond closed the second day of the Ultra Mainstage with their tearjerking yet thumping compositions like “Sun & Moon” and “Satellite”. If trance is set to make a comeback, Ultra Singapore is definitely making a case for it.

A weakening, but passionate resistance

Aside from the Ultra Worldwide stage, the Resistance stage continued to accommodate to the underground house and techno hunters this year. But as much as the sheltered stage smashed it with slick production levels and an ensemble of titanic acts – such as Suara label-owner, Coyu, and French techno veteran, Popof – it couldn’t attract a crowd large enough to fill its space. Perhaps, house and techno fans in Singapore are beginning to dissociate an EDM-heavy festival like Ultra with their type of jams? We’ll see in upcoming years.

But for those who showed up, they showed up strong. Oxia tore the house down with his arsenal of tech-house, and struck a chord with fans when he played his renowned production, “Domino”. Nastia – sadly, the only female DJ to play the Resistance stage – shook us hard with shuddering, amp-shattering techno. And like a true master of his craft, Loco Dice demonstrated why he’s one of the industry’s greatest, busting out tech-house, techno, and everything in between.

A wonderland with surprises in every corner

What makes a music festival so astonishing is that it’s not just about the music; it’s the fun you find along the fringes. We stumbled upon a bunch of Insta-worthy attractions – including a mesmerising mirror installation by DBS, a wall of basketball hoops by Red Bull, a secret club room by Sony, and pimped-up automobiles by Mercedes-Benz. Also, we hope you managed to enjoy your experience at our Ultra x Urban Journey booth!

This year, we had a booth in partnership with Sarnies coffee, where we whipped up delicious Espresso Martinis made with Belvedere Vodka and coffee. And to spruce up festival-goers, we even provided colourful glitter and tattoo services suited to the magical madness of the festival. We had an amazing time, and we certainly fancied meeting all of you!

So where does Ultra Singapore go from here? It’s definitely far from dwindling in appeal amongst commercial-loving crowds, but still, more can be tweaked. A more gender-equal lineup and more local representation are good places to start, and perhaps, more genres in the Resistance stage – such as disco and deep house – to capture more audiences. But overall, with what we’ve seen in Ultra Singapore’s staggering stage design, punctuality in acts, surprising fringe events and efficient payment system, colour us impressed. With a few more adjustments, this festival can truly be an event of ‘ultra’ proportions, for all audiences.

This article was written by guest writer, Kevin Ho.