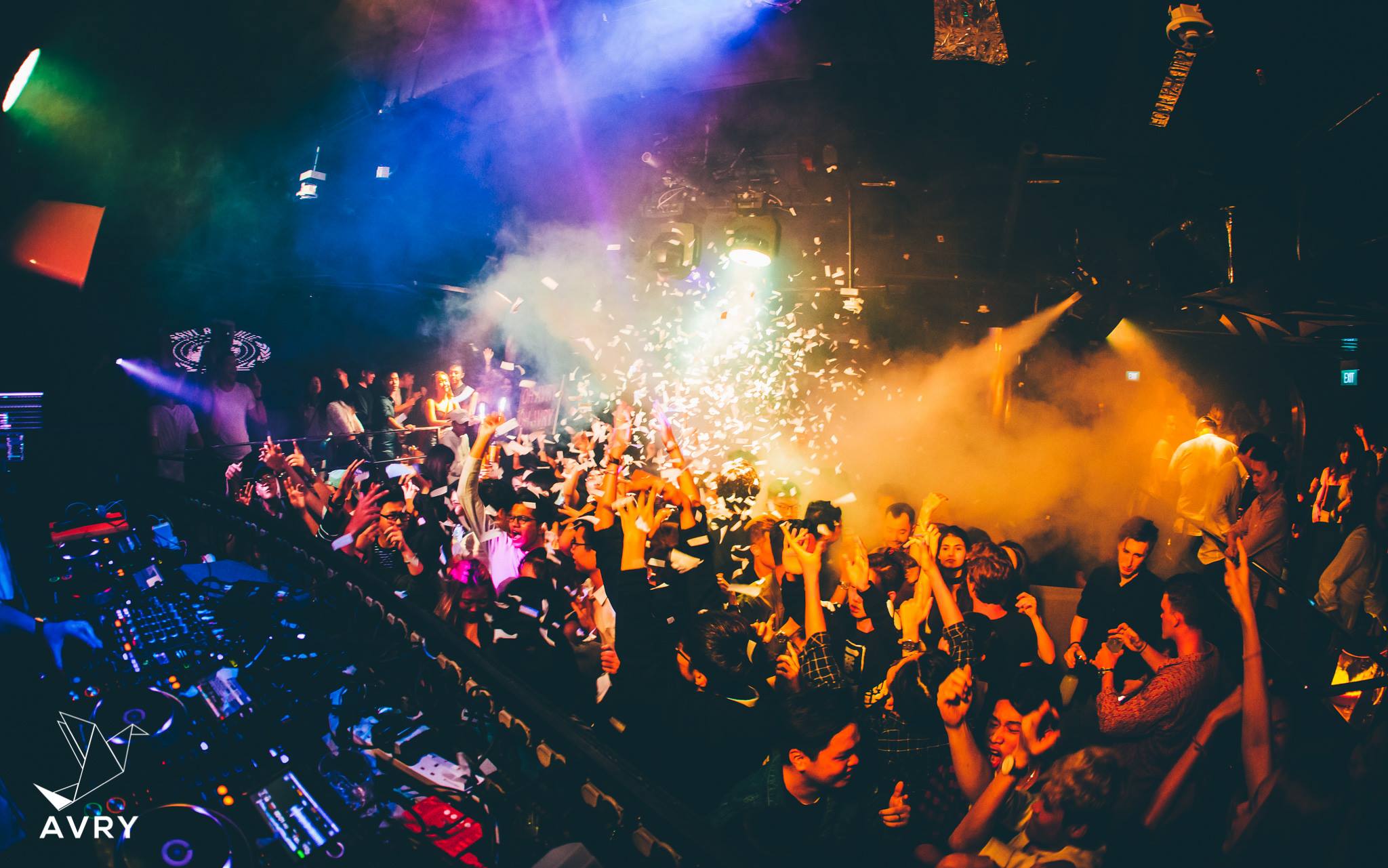 We love us a good dance throwdown, especially if it’s in an amazing space with world-class DJs pumping out sick beats, tricked out sound systems, and plenty of other like-minded revellers to feed into the energy. And while free-flow booze and polished bottle service doesn’t hurt, we’re also cool with good ol’ pay-as-you-go beers ‘cause after all, it’s all about the music and the vibe right? If you’re looking to hit up the dance floor to some next-level deep house, techno, hip hop, or trance, these are the biggest players (or should we say playgrounds?) on the Singapore nightlife scene (ranked in no particular order).

Brought to us by the team behind ULTRA Singapore and some of Singapore’s most famed nightspots, Avry is a 6000-square-foot space where gilded birdcage booths line the dance floor and a Dom Perignon VIP lounge beckons with a wall of illuminated champagne bottles. The concept is a sleek sanctuary where birds of a feather can flock together over EDM beats by top-tier DJs from Singapore and abroad. For after-work drinks earlier on, check out the slick cocktail bar, Hairy Canary, right next door. 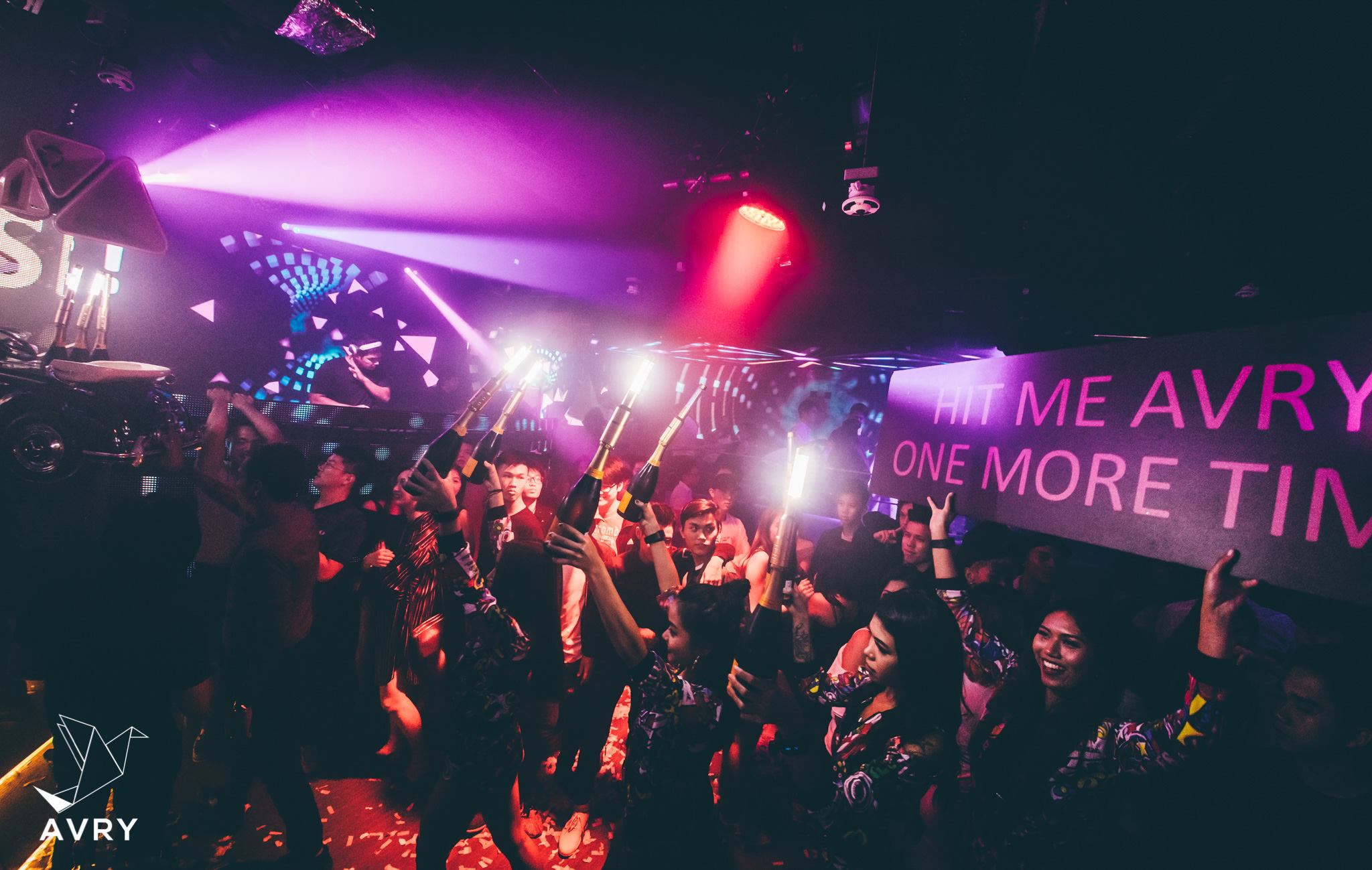 High-energy hot spot Bang Bang recently underwent a facelift and now has a slew of new features that set it apart from the competition including a diamond-shaped dance cage lit up in LED lights, illusion infinity tables with CO2 guns, and a bottle vault showcasing beautiful bottles that are hand-painted and bejewelled by local artists. However, our favourite new mod is the elimination of cover fees. Props to Bang Bang for becoming the first nightclub in Singapore where entrance is free every single night of the week!

Glam and glitz is a given at Bar Rouge, an outpost of the famous swish nightclub in Shanghai. This red-themed space is perched on top of Swissotel The Stamford and has floor-to-ceiling windows that offer sweeping views of Marina Bay from 71 floors up. Adding to the opulence are cabaret dancers, a custom-built sound system, and LED lights and lasers that seem to dance along to the electrifying rhythms thrown down by some of Asia’s best DJs. 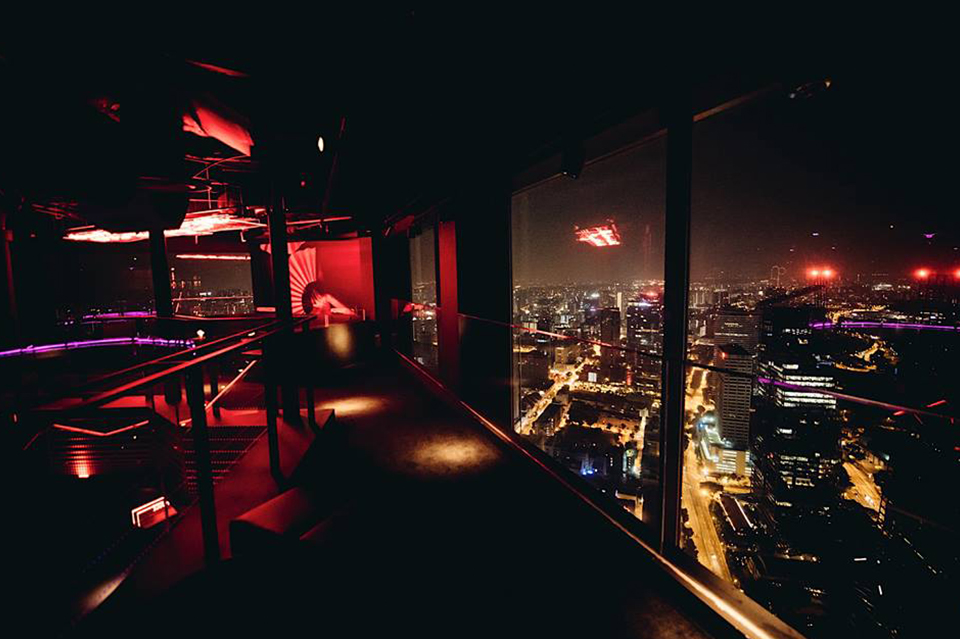 If you’d rather have gritty, underground vibes than over-the-top extravagance, Headquarters is your spot. This small, intimate space on the second storey of a shophouse is straight-up and simple with a DJ booth in a cage at one end of the room, a bar at the other, and a dance floor flanked by graffiti-strewn walls. This is for the deep house heads and the down-to-earth crews who just want to lose themselves in the music and dance until the sun comes up. 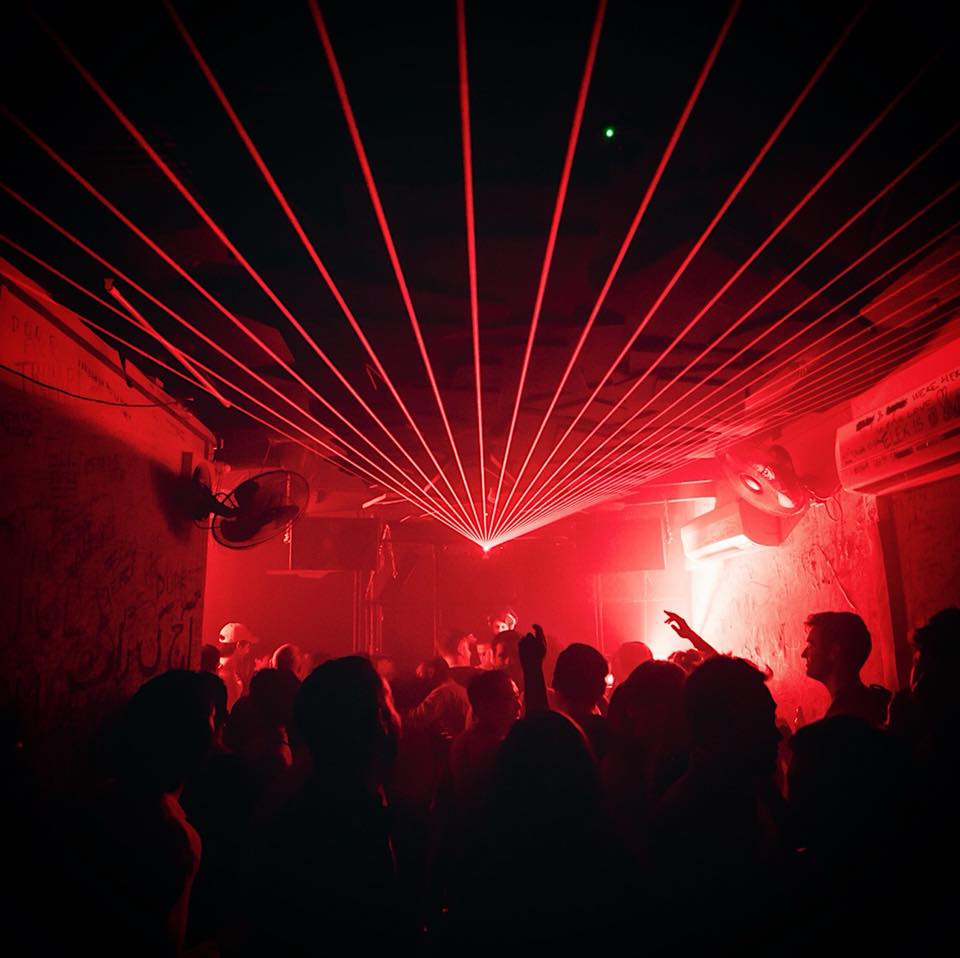 Kilo Lounge has been rocking its current locale on Tanjong Pagar Road for well over a year, and it’s pretty safe to say that the not-so-new-now spot is just as popular as the old one. Follow the beats down a winding corridor and you’ll end up in an inviting space with a decent-sized dance floor that more often than not is packed. Depending on the night, the music could be anything from dance hall to deep house, dub, or techno. Past acts include Pharcyde, Talib Kweli, and Grandmaster Flash.

Zouk was the first to introduce house music to Singapore over 25 years ago, and it’s still going strong today at their massive new home in Clarke Quay. This iconic Singapore club offers a multitude of spaces to party including the two-storey main room that can hold up to 1,500 clubbers, Phuture for hip hop and R&B, the sleek and stylish Capital whisky lounge upstairs, and Red Tail, a craft cocktail hangout next door. 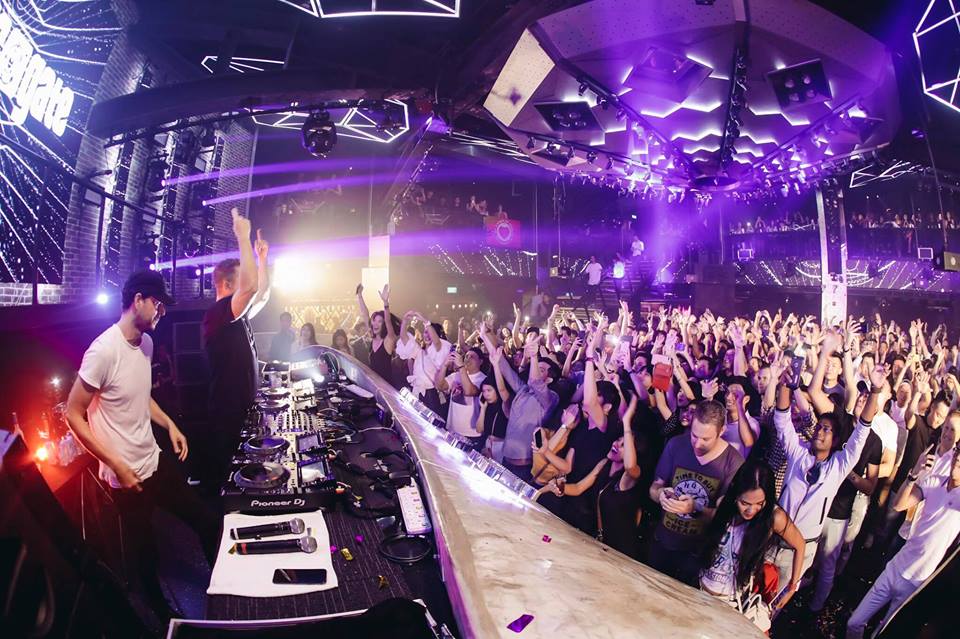 You may recognize the name from their legendary outposts in NYC, Las Vegas and Sydney, the former of which has even earned them a Harvard Business School case study. The club even houses its own ferris wheel containing 8 pods, each of which will contain a photo booth.  The club is renowned for featuring big name artists including DJs such as Tiesto, Kaskade, Dash Berlin and most recently, the iconic rap duo- Rae Sremmurd. 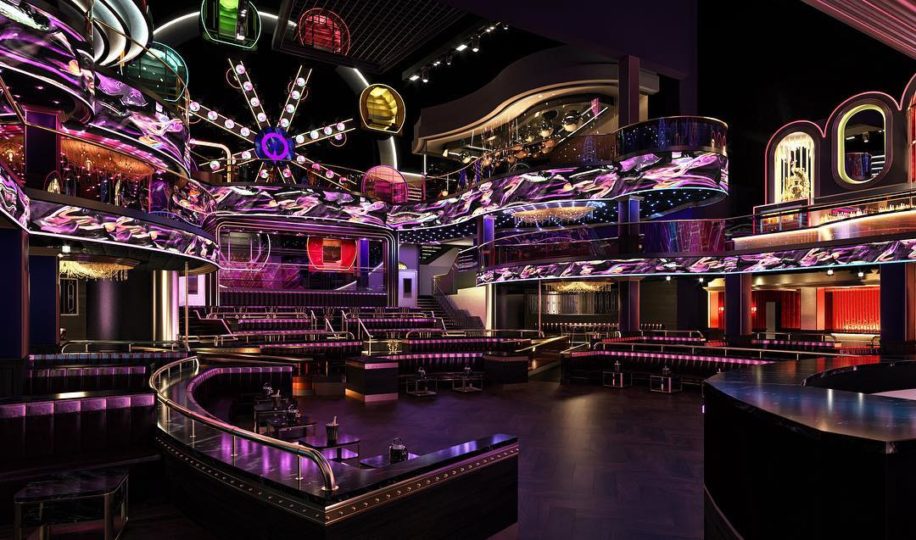 Our clubby lounge scene just got ramped up a notch with newbie Avenue on the scene. Expect to groove to a variety of music including R&B, hip-hop, open format mash-ups, and more. This spot is equipped with a mini bowling alley, arcade with vintage pinball machine and top of the line Funktion One sound system and its the perfect place for a lavish and intimate night out. 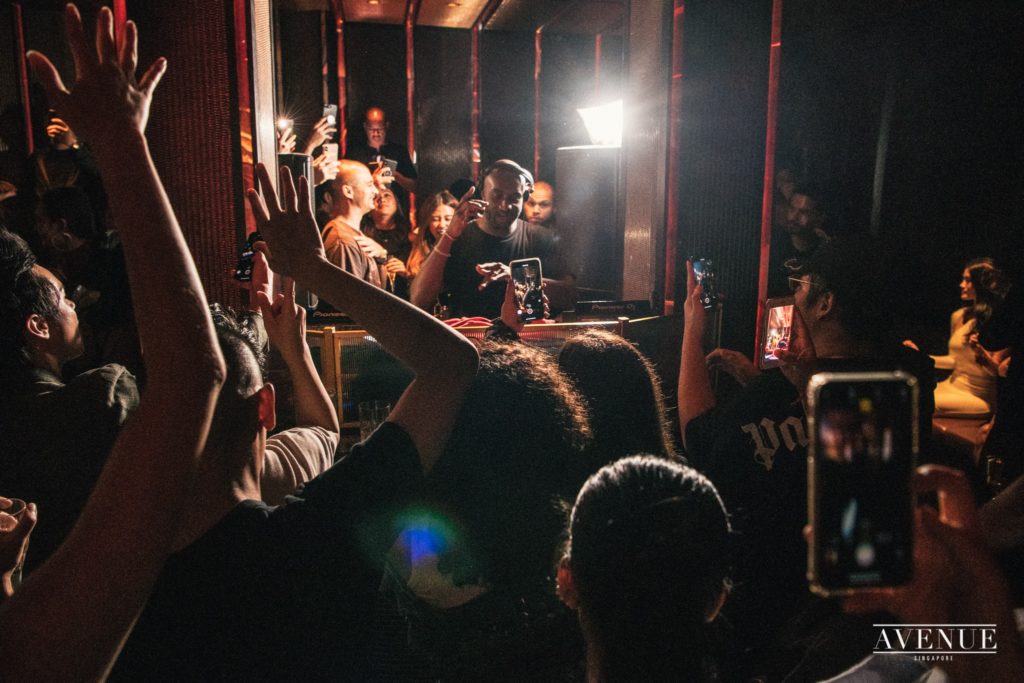 CÉ LA VI is the quintessential Singapore hotspot perched high atop the SkyPark Observation Deck on the 57th floor of Marina Bay Sands and offering unrivalled views of the bay and the city skyline. At this sleek resto, bar and lounge the decor is chic, the Contemporary Asian cuisine is fresh and innovative, and the atmosphere is amped up when DJs from Singapore and abroad light up the decks.

Lavo, a highly acclaimed New York bar and lounge, has planted its roots in Singapore, bringing its swanky New York vibes along with it. Come early to enjoy some award-winning Italian dishes and watch the venue transform from a lavish restaurant to an energetic nightclub. 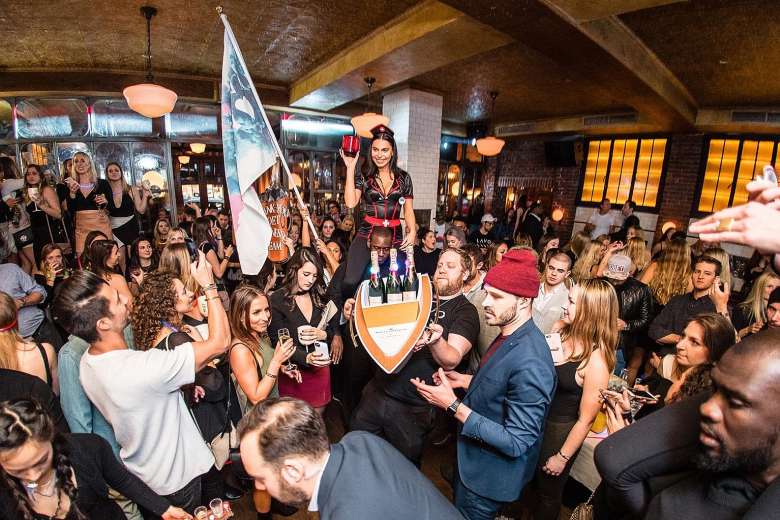 The Council, a boutique nightlife agency, has brought forward its new venue- Tuff Club, to host their epic, head-banging rave fests at. Driven by their efforts to preserve the ethos of club culture, they’re determined to ameliorate the jadedness of experienced clubbers with its new playground. 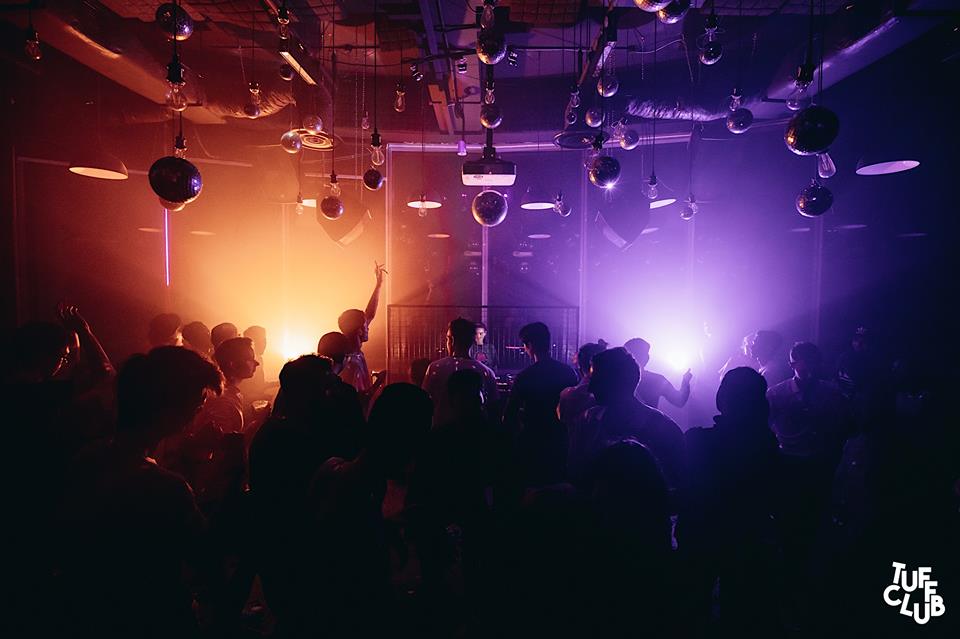