Over the past few years we’ve watched Singapore’s nightlife grow exponentially to the point where we now have tons of variety for all types of drinkers from chic wine bars to hole-in-the-wall dive bars and everything in between. That’s great for us because we’re always on the hunt for new hangouts that offer something a little bit different from the norm. Lately we’ve been coming across tons of cool spots where you can have a whole lot of fun while you down a few with your mates. We’re talking places where you can join beer pong matches, play old-school arcade games, or sing your heart out to glam rock classics. If you’re up for a bit of revelry with your drinks, these happening bars offer so much more than just drinks.

Nick Haas may have manned the bar at hip cocktail dens like Vasco and the Cufflink Club, but when he opened his own bar, he had something a little different in mind. It’s all about hanging loose at this American KTV spot where risque napkin drawings cover the ceiling, particle board lines the walls, and reasonably priced drinks flow from the bar. Grab a beer and shoot some stick, belt your heart out to hit tunes in the KTV room, or get in on a rowdy game of beer pong or drunk Jenga.

Just like the name suggests, this unpretentious watering hole specialises in brewskies with over 60 different types of beer made extra cold by special ice tanks built into the bar. Once you’ve made your selection, head to the back for a game of darts or upstairs to Stellar Bar to play some pool and catch live sports matches on the flat screen TVs. There are always great specials going on for beer and booze, and they often throw parties and competitions where you can win free drinks.

If golfing is your game of choice, then Urban Fairways is the bar for you. This indoor golf club has a chic bar and cafe where you can mingle with other golfers over drinks and light bites before hitting up the golf simulator to practice your swing. The state-of-the-art simulator has 84 world class golf courses to choose from including Pebble Beach, Chateau Whistler, and St. Andrews to name just a few. You can also take one-on-one lessons with golf pros to up your game. 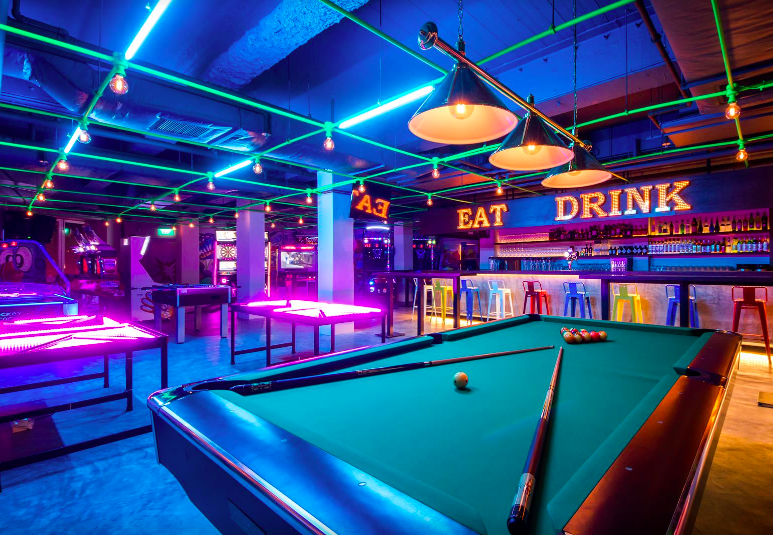 Bring out your inner 80s kid at Level Up, an arcade bistro bar in Clarke Quay where patrons are encouraged to eat, drink, and play. Retro video game characters are plastered all over the walls and old-school arcade games await like Street Fighter and The Bishi Bashi. At the bar they serve up cold beers and classic cocktails, and there are tasty bar bites like fish ‘n’ chips and gyoza on offer. They also have pool tables and the occasional live band.

Newly opened in Tanjong Pagar, Nineteen80 plays on nostalgia with 80s themed music, cocktails, and arcade games. Step inside the brightly coloured space and grab a seat at the bar for bevvies like Bacardi Breezers or the Blue Lagoon with a hint of yuzu. Then snag a spot at one of the game consoles to see if you can beat the high score on Pac-Man, Mortal Combat, or Space Invaders. Resident DJs add to the vibe with funky hip-hop, house, and disco.

Don’t Tell Mama is a hip little spot serving up an array of interesting Korean-fusion drinks and eats. Think bulgogi fries, buckwheat pancakes with kimchi and pork, and sojuritas (like margaritas but with soju instead of tequila). Groups can book the beer pong table and join in challenges where the losers have to pay for the winner’s beers. Other games include drinking roulette and a pop-up pirate game.